When I need a moment to pause, a moment to collect myself and search for some hope and optimism, I head into my office and gaze at my walls. It is filled with paintings from children aged 5-17 years old whose journeys through child welfare, while bumpy, just might be trending upwards. My wall bursts with hope and color–and a hint of healthy naughtiness that liberates.

Maybe you need a spark as well, so take a peek (kids’ names removed). 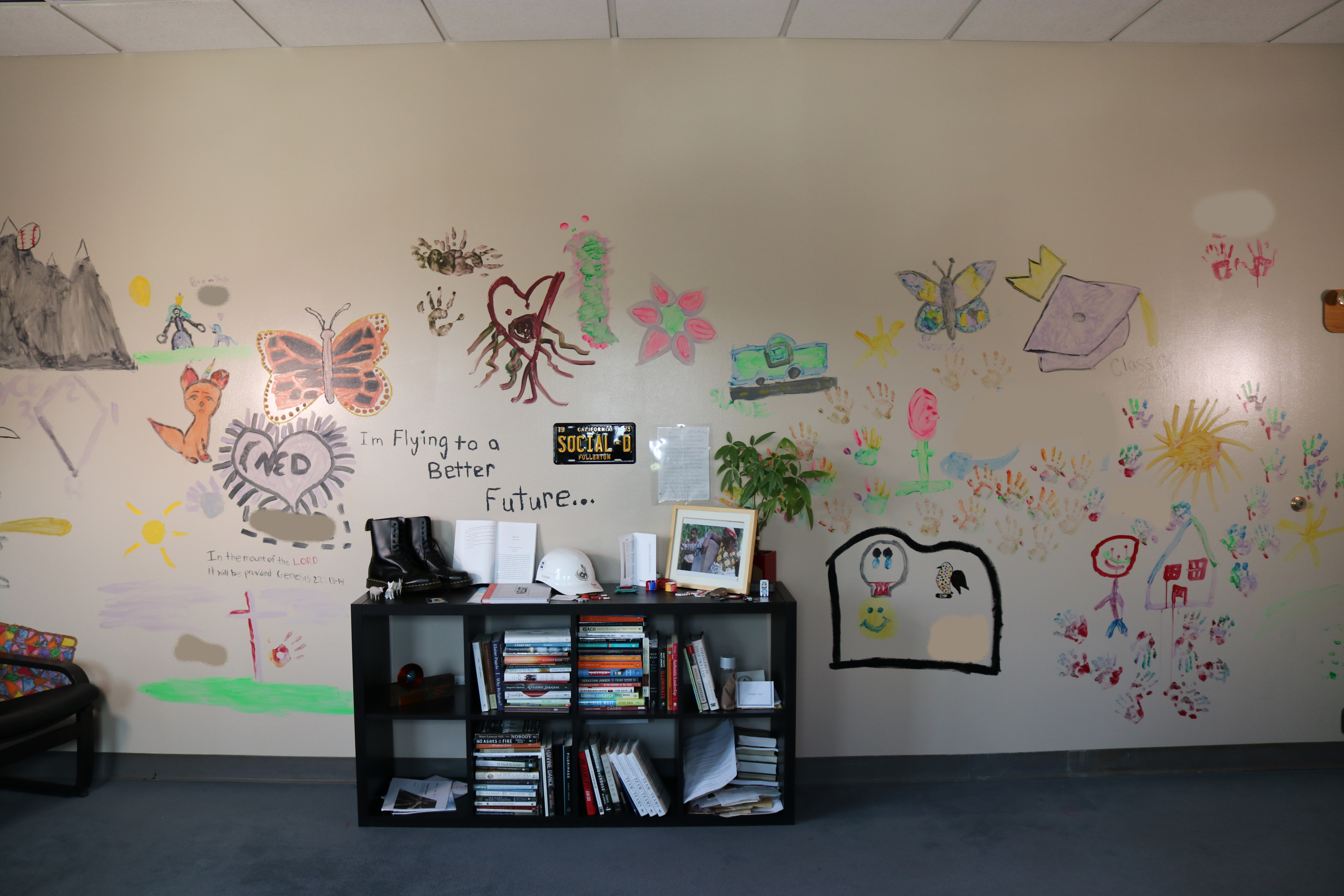 It started with a boy whose journey through child welfare was, as depicted on my wall, like a roller coaster. A kid, like many, who most had given up on and who wondered if he should just get off the ride, like so many fellow travelers. Adolescents whose journeys include stints in child welfare and foster care are four times more likely to attempt suicide than other youth, and we sadly see that calculation on display often.

But he held on and headed upward. 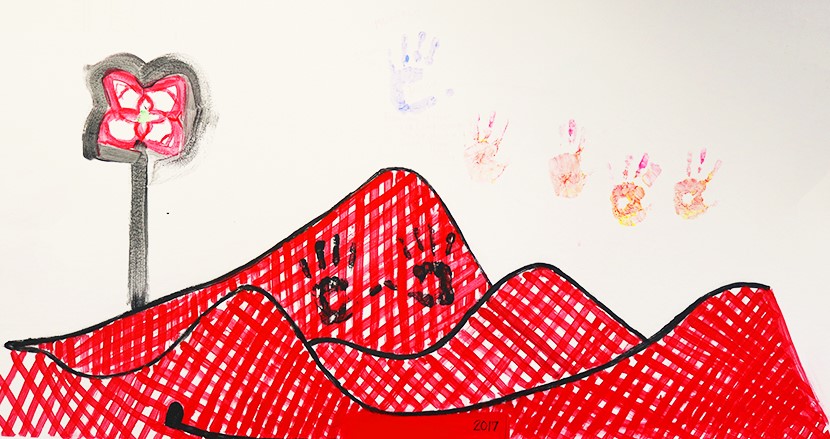 The handprints are his and his sister’s, whom he had not seen for years and with whom he was finally reunited, joyfully, as he headed home to a caring mother whose own healing journey is story-worthy. His brother came through a year later and, as he shows in his addition to my wall, he too headed home. United again, healing together, still riding a rollercoaster but with family instead of alone.

Colorado rightly passed legislation making it easier for siblings in child welfare to stay connected, spearheaded by former foster youth who know the pain of separation from their brothers and sisters. My wall beams with stories of siblings reuniting and burst with optimism and love because those connections are re-established.

One girl mirrored this in her painting. A long history of abuse and self-harm to cope with the pain, and a mother who stood by her side throughout. A heart sewn together and a message of hope screaming out that she is a gift, not a statistic. 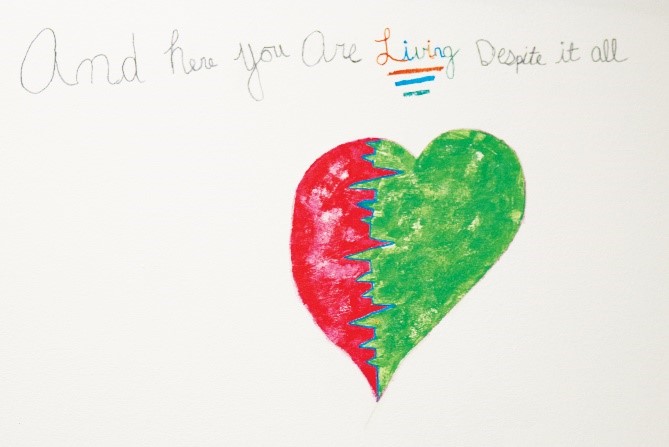 I always smile widest at one of the smallest paintings on my wall, from a 6-year old boy who I first met when he was not speaking. His trauma was so severe that he went deep inside to a voiceless place of pain, as many on this journey are prone to do. He drew this always, and uttered “train” to a loving staff member who once mistook his drawings for a “car”. Santa came to visit, as Santa always should, and when he opened his present–a train set that seemed bigger than this boy–he walked over to Santa, hugged him around the knees and said, “Thank you”.

He found his voice, kept talking and healing, and left his mark on his way to a new home that embraced him in all the best and appropriate ways. 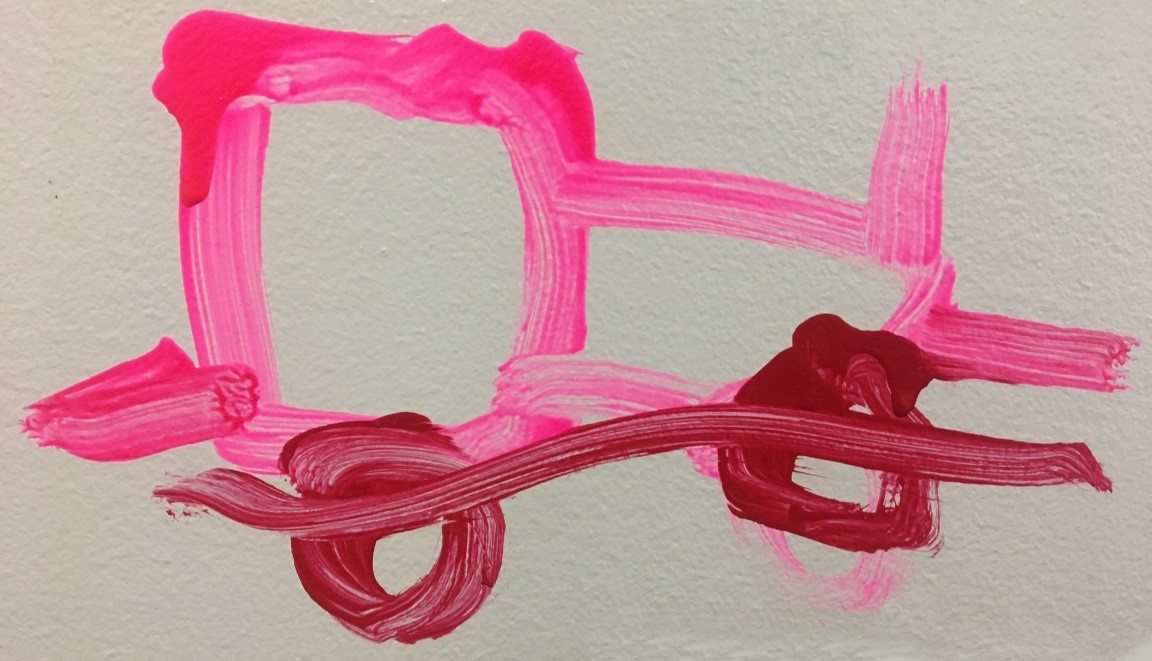 Butterflies are everywhere, as they should be. Children emerging and flying upwards, across Colorado and across my walls. 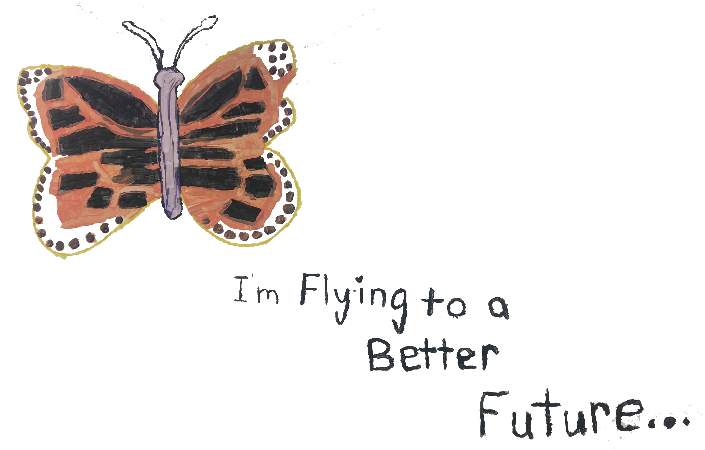 Sports abound. The Rockies’ Carlos Gonzales hitting a homer over the Rocky Mountains, an Ohio State logo behind my desk that I struggle with because I am all ‘Bama, but a logo I cherish from a boy who spent every Monday reflecting with me on college and pro football results, whose ability to understand statistics and outcomes wowed me, and who is now back in public school, united with his courageous mom, and who called me at the end of his last semester celebrating his 3.5 GPA. 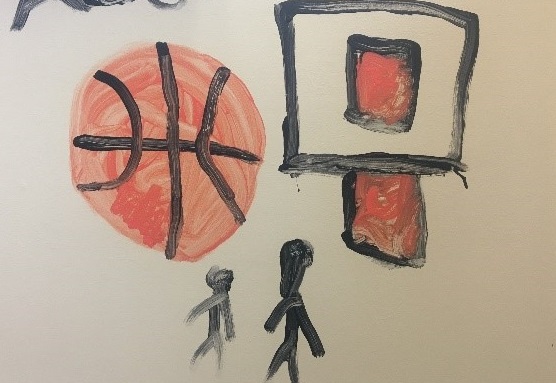 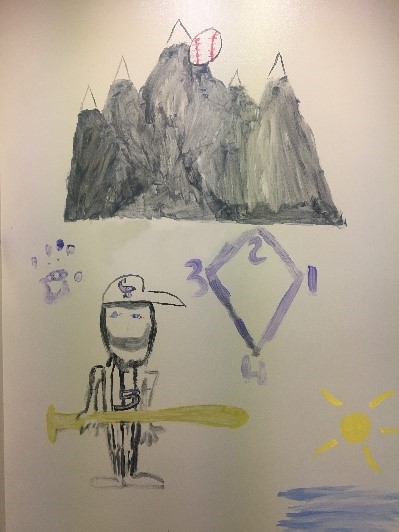 A graduation cap from a girl who was 4 years behind in school because her trauma necessitated healing–away from formal education. Dropout rates for children in Colorado are significant and getting worse, but she bucked the trend, caught up, and graduated against the odds. She found strength in her journey and refusing to let her trauma define her. 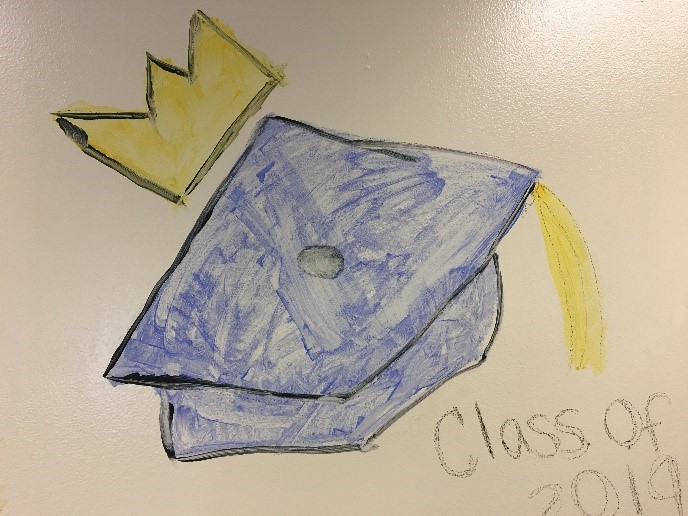 My new favorite is of a stained-glass window, from a child who, like others, brings true meaning to the world “resilience”. Young children come to see her as she is painting, tears in their eyes as she was always able to connect with children in ways that adults often could not, walking them through some of their worst moments as a fellow traveler who is in a place where she is increasingly seen as a healer. She looks at me when finished and smiles, says she, “Shines in different colors.” As she packs up the paint, looks at her painting in relationship to others on this wall, she heads home–permanently, we believe. 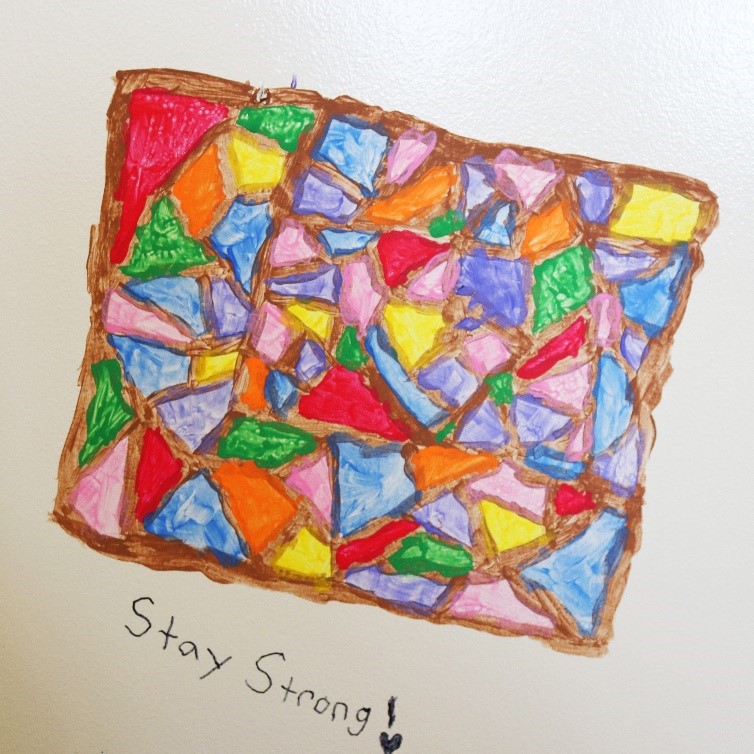 She and the many of the kids who have left their mark on my wall and in our hearts, are our neighbors. They are everywhere across Colorado, standing up and forging ahead. They give me hope, especially during the times when kids’ pain is so palpable. 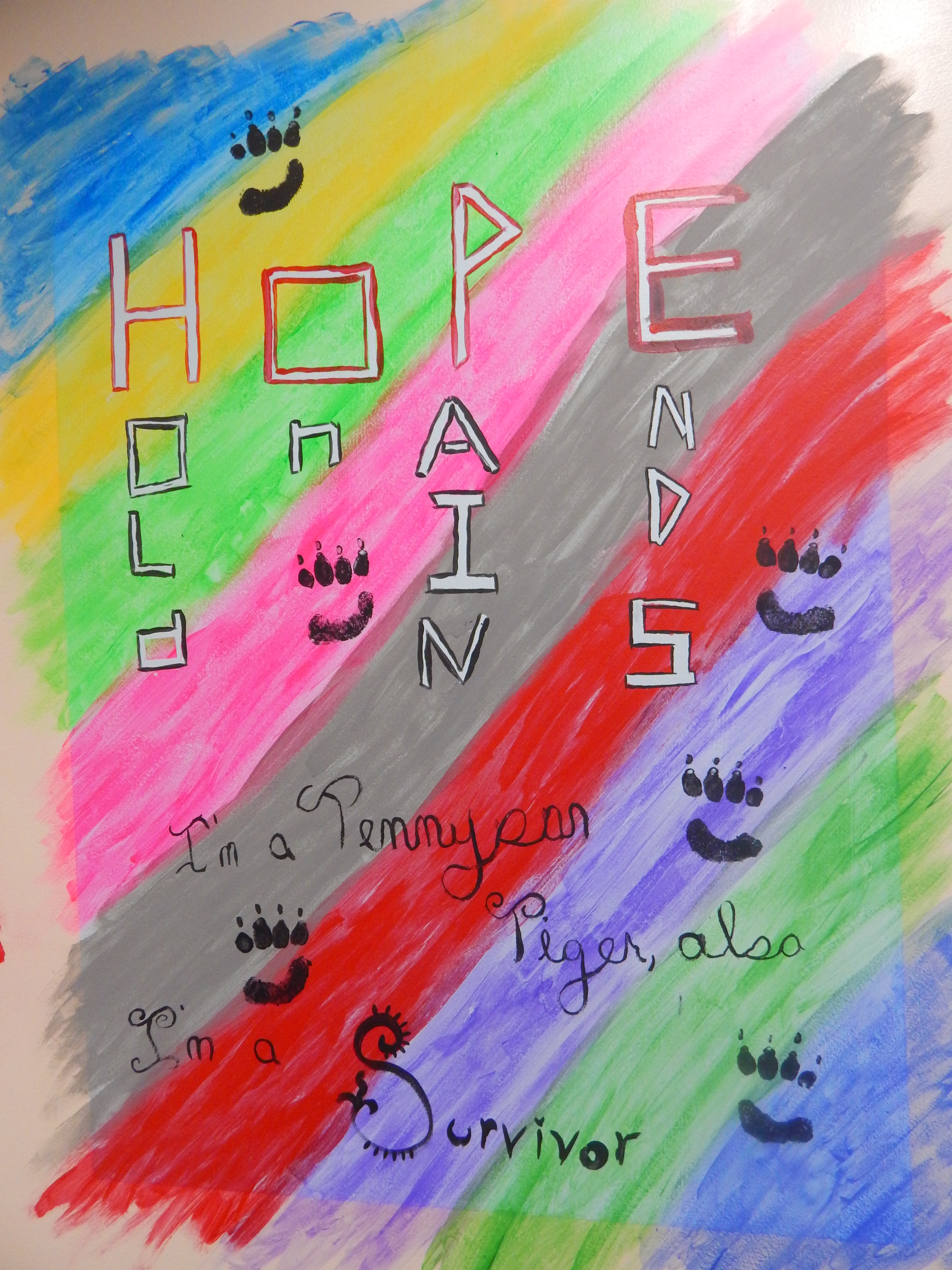